Bethany Schneider on the Approach That Wins Major Verdicts

In 2019, Bethany Schneider won a $5.5 million verdict for a man who suffered a mild traumatic brain injury when he was struck by a falling pipe. She followed that up the next year with a seven-figure award in a car crash trial. It was the first pair of plaintiff's wins for Schneider, who had already established her reputation as a standout defense attorney over nearly a decade with King & Spalding.

Schneider sat down with CVN's Arlin Crisco in a wide-ranging discussion covering everything from her move into plaintiff's work after so many years as a defense attorney to how creative demonstratives can connect with a jury.

The discussion is highlighted with real trial video from Schneider's TBI case, showcasing the innovative courtroom techniques used by one of the plaintiff's bar's rising superstars.

Bethany Schneider on the Approach That Win Big Verdicts

After nearly a decade with King & Spalding, where she stood out in high-profile product liability cases, Bethany Schneider moved to plaintiff's personal injury work, founding  Schneider Injury Law. Consistently named among Super Lawyers' Rising Stars, Schneider's significant trials include a $5.5 million verdict for a Georgia man injured by a falling pipe, and a seven-figure award for a woman injured in a rear-end vehicular collision. 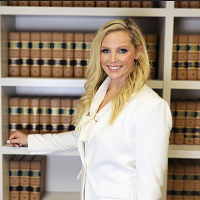 Bethany Schneider talks about how her office is handling covid-related court disruptions, as well as her transition from BigLaw defense work to a solo plaintiff's practice.

A lot of the creativity that I learned, I’ve been kind of able to use on the plaintiff’s side, of course, because I kind of know what defense lawyers are thinking and what the defenses are. — Schneider on leveraging her experience as a defense attorney now that she represents plaintiffs.

Schneider discusses the background of the Laguerre case, involving a taxi driver who suffered a traumatic brain injury when a pipe fell from a hotel roof and struck his head. She also details how she approached the fact that a pre-trial settlement with the property owner left the construction contractor as the only defendant at trial

You don't want to, as the plaintiff, be put in the position of defending some of the defendants. — Schneider on effectively arguing a case where apportionment among non-parties is an issue.

Schneider discusses her questioning of the defendant building contractor and the importance of that cross-exam to the verdict.

I had that, then, written on the easel for closing, to remind the jurors of that moment - a very poignant, I think, part of the trial.  — Schneider on highlighting the defendant's refusal to accept any responsibility for the accident.

Time gaps in treatment and addressing weaknesses in your case

Schneider outlines how she approached a time gap between the accident and the plaintiff's treatment. She also talks about how she handles perceived weaknesses in cases generally.

You have to take your worst fact and you have to figure out a way to actually make it work for you. — Schneider on the power of flipping a perceived weakness.

Every trial, I'm trying to figure out more and more ways to use demonstratives to get across... my points. — Schneider on her innovative approach to using demonstratives.

Schneider outlines her thoughts on damage requests generally, and why she waited until closing rebuttal to specify damages in the Laguerre case.

One of the reasons that we did use a range is because we did want to be the ones that set the floor.... we wanted to be the drivers of the bottom number.— Schneider on deciding to use a range of numbers in her damage request.

Schneider outlines how she argued punitives in the Laguerre case.

“The defense lawyer didn’t even go in front of the jury. He just stood up from his desk and just said basically ‘We think you got it wrong in the first phase,’ and I’m like thinking “Ohhh...I’ve been on the defense side too many times in the punitive phase. You don’t want to do that. — Schneider on the Laguerre defense argument in punitives.

Schneider discusses a car crash case in which the defendant died before trial, and her approach to trying a case involving sympathetic or deceased defendants.

Quotable moment: Every time we stood up… starting from the very beginning in voir dire, we always expressed sympathy to the estate, to the family members of the decedent. — Schneider on handling the fact that the defendant in the case had died prior to trial.

CVN offers hours of video on the topics Schneider discusses. Here's where to head next in our library.

Learn about the 10 must-watch TBI trials in CVN's library.